Emma Brown is a Studio Art Major from Slippery Rock, Pennsylvania. Her piece, Self-Portrait,  is currently on view at the Gund Gallery.

Emma’s piece is, in her own words, “painted on a Japanese-style folding screen with a number of scenes from my life and from events that influenced me.” She put a lot of thought into theming these moments.

As she explained to me,

“the first panel chronologically takes place on June 23rd, 2004. All of my panels were inspired by journal entries. So on one side of the panel, you hear about and see the charming things I did as an eight-year-old in 2004. The opposing side of the panel is a scene from the Iraq war, which was also taking place at that time, in 2004. In doing that, I just wanted to juxtapose the path of my own life and growth and development with events that were going on in the world and how I gradually became more involved and interested in, basically, international life…affairs…the fate of the planet.”

The silk-screen medium is unique. Brown chose it deliberately, to express her background. “I am half Japanese. The medium I chose was just very symbolic because oil on canvas is a typical, European, art form, and the folding screen or byōbu is an iconic Japanese art form.”

Brown took inspiration from the atmosphere and painting style of Hayao Miyazaki movies, as well as the work of Maira Kalman, an illustrator who draws magazine covers and illustrated narratives. both of these artists, “do a lot of visual art which is interspersed with text,” a style which occurs in Self-Portrait as well. 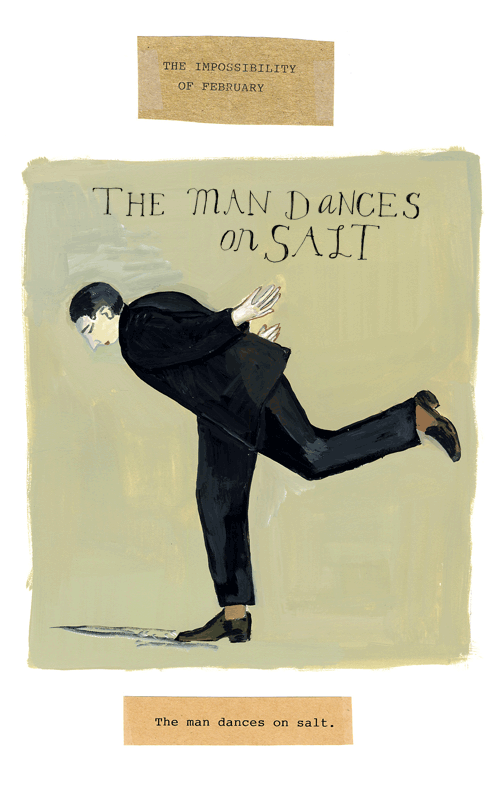 The image above is from one of Kalman’s illustrations that was published in the New York Times.

According to Brown, “This piece was half-painting and half-sculpture so, besides my comps advisor Reed Baldwin, I also got advice from Sandra Lee, the sculpture professor, and from Craig Hill, who I took painting with.” Brown also worked with “Ellen Sheffield, who is the bookmaking professor, because [she] made, essentially, a very large book.”’

Lastly, Brown gave one piece of advice to current Studio Art Majors who might be nervous about comps: “Start daydreaming about it, like now. That’s what it comes out of. Dream big.”